As of 2019, over 12.5 million visitors have come to see the Great Smoky Mountains. All three primary entrances to the park saw increased use, and there was significant growth in the secondary entrances, too. In April and May of 2019, more than 1 million people visited each month, setting a record. Before these months, there had not been more than 1 million visitors per month.

2. Salamander Capital of the World

If you spend any time around creeks or rivers in the park, you might see salamanders. The Great Smoky Mountains National Park is unofficially known as the salamander capital of the world because over 30 species live in this area. There are 24 species of lungless salamanders, and at any given time, there are more salamanders in the park than there are people. 4. One of the Only Free National Parks

If you’ve ever been to any of the national parks in the United States in the west, you know that the Great Smoky Mountains National Park is unique. You don’t have to pay an entrance fee! The Smokies get most of their funds from donations. The reason you don’t have to pay to enter the park is because of an agreement the state of Tennessee made with the federal government. Tennessee negotiated if they gave up Newfound Gap Road to be part of the national park, no one would have to pay tolls.

5. Within a Day’s Drive for Two-Thirds of the US Population 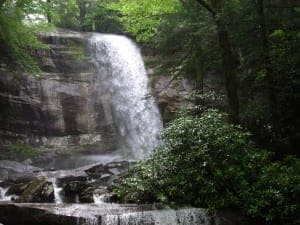 A cool fact about the Great Smoky Mountains National Park is it is within a day’s drive for about two thirds of the US population. Since it is such a short driving distance for so many people, that’s probably why the park has been visited by 12.5 million people!

The National Park Service wanted to have a national park in the eastern part of the United States. However, the NPS didn’t have enough funds to buy the land. Many locals donated their land, and a huge donation from John D. Rockefeller contributed to the establishment of the national park.

Now you know more about the Great Smoky Mountains National Park! Ready to come visit? Here are some great Gatlinburg attractions you should check out when you stay with us!